As I tried to figure out where the water from the streams keeps dwindling and why the floods have become so frequent, I remembered the time when I worked on a road construction and I saw water running down the logging roads for the forest machinery and the tracks made by trucks and off-road cars. The flow was sometimes so heavy it would carry branches, rocks, even whole trees.
The soil dark water washed away both the fertile and clay soils to the valleys below. To tread a road like this, filled with sediments and fast gushing water, was impossible, even life-threatening.
Conversely, I never saw water gushing down a slope, forest or vegetation-covered soil or down a clearing with no machinery tracks. One can effortlessly move about this terrain even during heavy rains. It entails that water flowing through these areas did not wash away a single leaf, even the tiniest tree branch...

My experience suggests floods start on forest paths in the mountains and they are caused by compacted surface areas on the slopes. It involves mainly forest paths, logging roads and forest machinery tracks which people leave behind even after they have discontinued using the road. 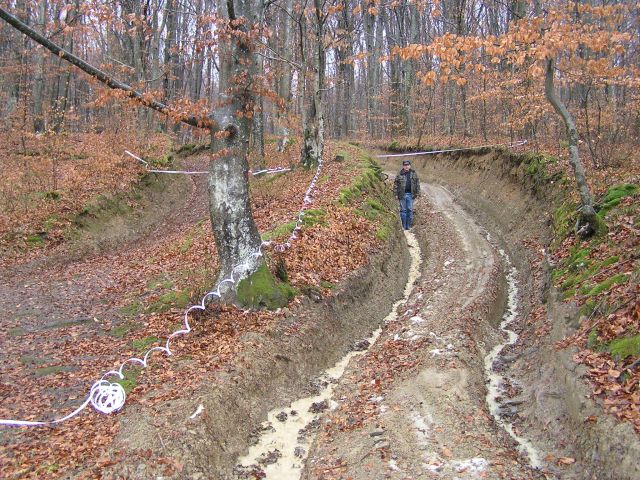 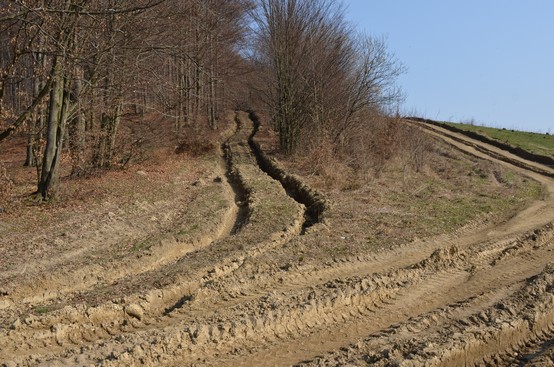 Unregulated increase in number of forest paths wreaks havoc. Water streaming on the run-down roads floods the villages and cities below and strips the forests of the fertile soil. Consequently, the soil gets dehydrated. I present an opportunity to avert this trend and preserve the forest paths dedicated to the economic activity at the same time. 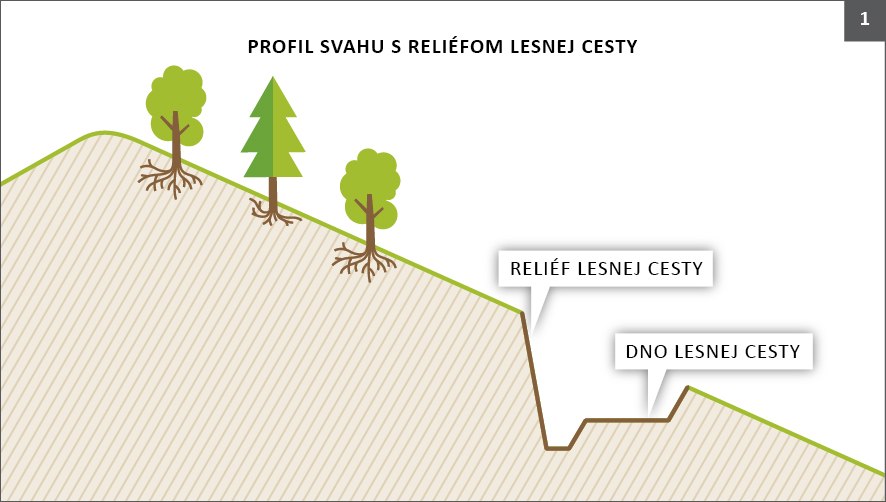 In an effort to stop draining the forests and prove what impact the compacted surfaces have, I decided to transfer my experience into actual flood defense projects in two locations of Eastern Slovakia.

Ťahanovce used to be flooded out from the hills nearby. During rains, the water would stream down the old forest paths and logging roads into valleys and wash out the houses.

It is necessary to agitate old forest paths transversely from top to bottom to retain the rainwater where it falls as the ploughed soil absorbs it. Agitation process performed in this manner ensures the soil absorbs the rainwater readily and can never gain dynamics which would turn it into a threat. 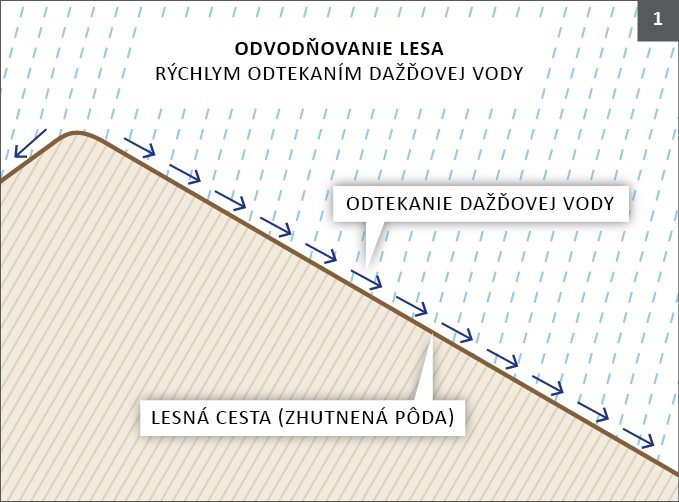 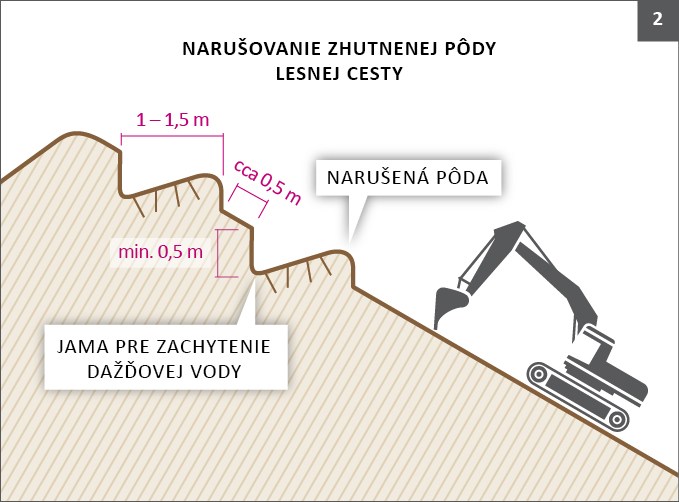 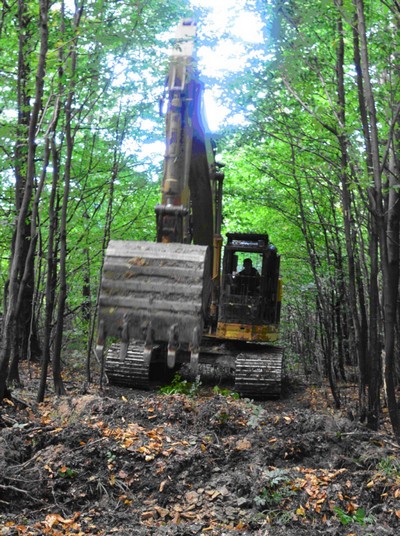 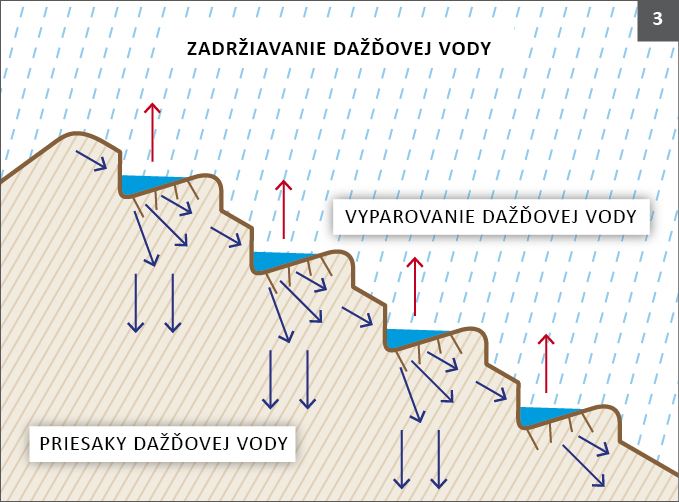 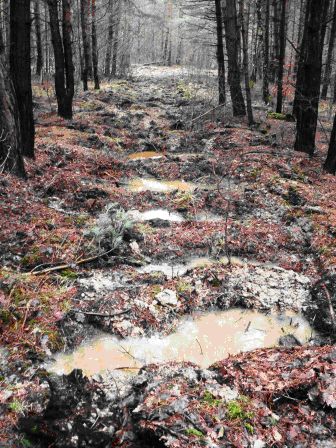 In the valley, we built three water retention levees which in turn created lakes. They serve a monitoring purpose. At the current rainfall rate, the water level raises only by a few centimeters. 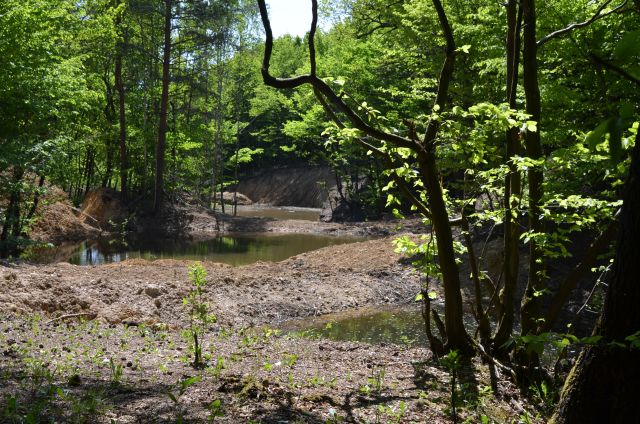 When the terrain modifications were completed, the flooding stopped. Roads with agitated ground retain all rainwater and do not drain the forest around, as the water slowly makes its way into the lakes and fills the groundwater system as well. After 7 months, the agitated areas grew new vegetation and started to blend in. The lakes which have since attracted people, birds and other wild animals have remained as the only visible marks of the recent flood defenses.

Slovak Academy of Sciences gauged the effectiveness of the water retention capacity of the forests in Ťahanovce. It was crucial to perform comparative measurements on compacted vs roads treated by soil agitation and forests by an independent scientific institution and.

The experiment was conducted on an eroded road formerly used for timber transport. The scientists simulated rainfall with the intensity of 100 mm/m2.

The compacted road hardly absorbed any water. The road treated by ground agitation, as measurements attest, contrived to retain 100% of water.

“Efficiency rate of this measure in the given conditions was 100%”

The part of the road which had been destroyed by digging was able to absorb the entire volume of the simulated rain (100 mm in 3 hours). As a result, no new surface runoff appeared. Subsurface runoff collected in the bottom gutter located 52 cm under the road surface represented 3.8 % of the overall volume of simulated rain. The subsurface runoff was observed as soon as approximately 1 hour after the commencement of the artificial rain and it lasted for some 7 hours (i.e. from 3:08 pm to 10:20 pm). Average volume of water retained in the pores of the soil forming the surface of the road for a longer time was 16 %. Most of the artificial rainwater (almost 80%) thus managed to soak into the lower layers of the road basement through incompact soil.
This proves that the efficiency of the measure regarding the surface runoff in the given conditions was 100%.

Influence of the undestroyed logging tracks on surface water runoff

The experiment has proven that the undestroyed logging tracks play a major role in the forming of surface water runoff. Most of the rainwater (here 81% of the simulated rainwater volume, Fig. 1) that falls on the ground does not soak into the ground but flows away along the surface.
Subsurface runoff collected in the bottom gutter located 52 cm under the road surface represented only 0.5 % of the cumulative volume of simulated rain. This runoff could be observed in the measuring gutter 3 hours after the start of the experiment and lasted for 12 hours (from 4:00 pm to 4:00 am). Most of the water infiltrating through the untreated road surface was retained in the pores of the soil forming the surface of the road for a longer time (approx. 18%, calculated as the difference between the soil moisture levels before and after the experiment multiplied by the approximate volume of the surface soil layer), or soaked through the soil basement to the layers located more than 75 cm lower (100 % – 81 % – 0.5 % -18 % = 0.5 %).

Tourism potential boosting project in the North East of Slovakia has shown that flood defenses could be not only efficient but also appealing to the eye. 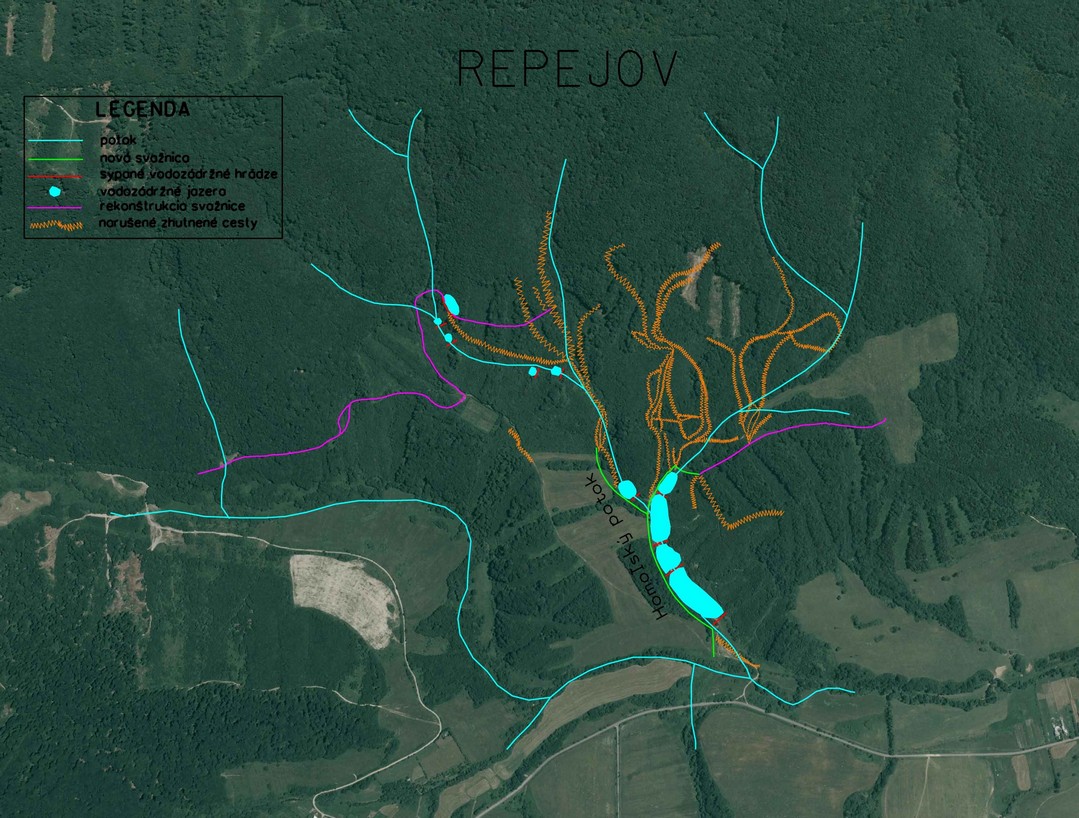 I built a system of water retention structures with emphasis on esthetics. There are six lakes in total.
Four of them make a cascade of drainable polders and serve to regulate the water level.
When the sides of the lakes grow new vegetation, it will create a landscape which can be used for leisure.
Such measures however must always go hand in hand with treatment of forest paths.

For this reason I agitated all compacted defunct logging roads and forest paths once I mapped them in the hills overseeing the lakes. The machines started agitating at the highest point of the forest path and progressed all the way to the foot of the hill. Agitation process performed in this direction ensures the soil absorbs the rainfall immediately and can never gain dynamics which would turn it into a threat.

In seven days we agitated and treated over 14 km of forest paths.

Both presented flood defense projects are effective immediately and the costs concerned are nowhere near those of pricey dams.

In one of our projects, our team worked on raising the dam on the Uh river by 1.3m over 4.5km.
Nine pieces of machinery worked here for three months. The overall costs scaled to 800,000 EUR. Now the dam looms over an empty river and waits for the torrential rains which will come from the mountains sliding down the compacted ground of the forest paths and logging roads and bringing in heaps of stones, gravel, and fertile soil which sustains life in the mountain environment. If they fail to bring the water under control, the catastrophe is imminent. If they succeed, the forest will still miss the rainwater and the fertile soil which gets washed away during a washout.

In contrast, the same number of machinery in the same time could plough as many as 800 km of compacted 5-meter wide forest paths. In other words, the 4 km2 or 400 could retain nearly 400 million liters of water, at the estimated rainfall rate 100mm/m2, at the equivalent cost.

The water retained in the forest cannot not flush in the valleys and unleash a catastrophe. There is more. The water absorbed in the forest ground fills the water springs and groundwater systems. Water is life. The natural balance of a forest can be restored. Wild animals could depend on available water resources. Vegetation vitality would intensify.

My observations and experience have prompted me to propose the following measures to be adopted expeditiously:
1. Reclaim forest paths by eliminating road drainage ditches and by keeping them only in places where the road stability would otherwise be compromised;
2. Eliminate culverts. Keep them and a small ditch next to them only in places where a spring oozes out of the slope above the road;
3. Eliminate the impact of logging roads immediately after logging has been completed by transverse agitation of the compacted soil with a suitable excavator, from top down;
4. Adjust the methodology of designing, construction and inspecting new forest paths accordingly. It is imperative to incorporate the concept of rainwater dispersal in the vegetation on the slopes below the road as early as the design phase of a forest path and to implement it consistently throughout the construction stage;
5. Elaborate technical solutions for the dispersal of rainwater on the slopes under existing forest paths with asphalt or other solid surface;
6. Reclaim each m2 of forest ground degraded by logging machinery, as soon as possible after logging has finished by transverse agitation of the compacted soil with a suitable excavator, from top down;
7. Wherever possible, make it a priority to retain rainwater by building water systems where it falls or disperse it in the forest vegetation instead of building anti-flooding dams and polders at the foot of the mountains and the plains;
8. Perform field observations in the mountains to monitor how water behaves on the newly built forest paths, logging roads, machinery tracks, during rain to discuss facts.

I am convinced this is the only way to prevent the unwanted surface drainage of rainwater and washing away of the fertile soil from the forests and the landscape.

At times when we witness frequent torrential rains, it is crucial to come up with the most natural solutions possible. Arrangements which not only halt the gushing water from causing damage but also utilize it to our advantage – by letting it fill springs which can ensure ample water resources or create delightful sceneries.