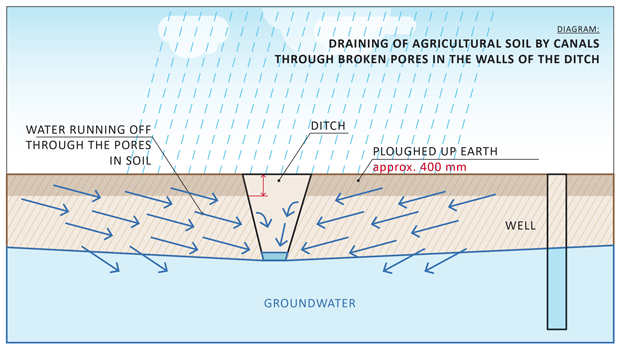 In 1940s, draining canals started to be built in Slovak lowlands. They make the water which has soaked into the fields run off through the broken pores in the canal walls, leaving the canal empty. Thus, surrounding fields are drained as deep as the bottom of the said canal all the way along the canal.
It is from this period that climatologists have started to note the major increase of the Earth’s surface temperature.

Since human activities lead to the draining of rainwater off the agricultural land, groundwater levels are dropping even below the level of the canal bottom.
Fast water runoff from fields also causes rapid drying of the soil. It is not uncommon that we see a field drenched when it is raining and, just a few days later, we can see the very same field overdried.

My observations indicate that drainage, drying and overheating of agricultural land represents one of the two main causes of the excessive increase of extreme temperature events in the last three decades.